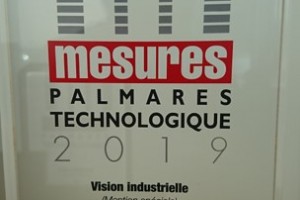 Sony Europe’s Image Sensing Solutions has been named by the journal Mesures as one the vision and automation industry’s best innovations.

The award was received by Arnaud Destruels of Sony Europe’s Image Sensing Solutions division at a ceremony held by Mesures at the Fieec in Paris, with Sony receiving a Special Mention in the Vision category, placing it as one of the best two vision technologies from the past year.

The XCG-CP510 is the first in a new series of polarised vision cameras from Sony. By combining Sony’s IMX250MZR/MYR  on-chip quad-filter polariser with Sony ISS’s engineering prowess in developing vision modules the XCG-CP510 delivers images that eliminates glare, and highlights issues such as stress and fractures for manufacturing.

Sony has also uniquely coupled this with a software development kit that cuts average development time from between 6 and 24 months to just 6-12 weeks (depending on application / team).

Speaking at the event, the 24th Destruels said: “The engineering team at Sony are delighted to have won such a prestigious award”