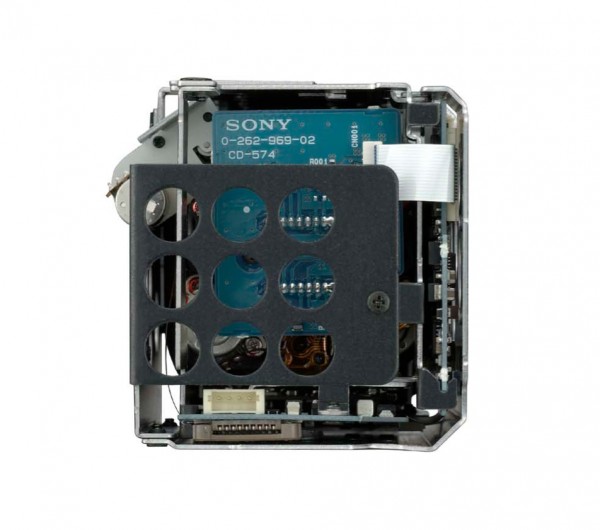 26x zoom lens which has a wide/telephoto horizontal field of view, making them ideally

suited for use in security domes and traffic monitoring applications. These cameras

incorporate an advanced Spherical Privacy Zone Masking feature which allows the masking function to be interlocked with the camera's pan/tilt/zoom movements, regardless of the camera angle, ensuring the individual’s privacy.

In addition to the features above, these cameras are conveniently equipped with a variety of functions such as E-Flip, Alarm, Picture Freeze, and Auto ICR*1, which have all been inherited from earlier FCB-EX series cameras. Moreover, the entire FCB-EX series uses lead-free solder and halogen-free printed-circuit boards, making these cameras environmentally friendly.

Combining superb picture quality with a variety of unique and convenient features, the FCB-EX series cameras are the perfect match, both indoor and outdoor, for demanding security and monitoring applications.

These cameras incorporate a 26x optical zoom lens, allowing for a zoom capability of up to 312x when used in combination with its 12x digital zoom. Users can zoom in on small or distant objects with exceptional clarity.

The FCB-EX980S/EX980SP cameras feature a 42º-wide field of view that provides the highest telephoto zoom capability (1.6º) available in the Sony FCB family. The zoom range is “tele-shifted” toward the telephoto end.

A newly developed Spherical Privacy Zone Masking feature allows unwanted or prohibited areas within an image to be masked precisely and appropriately. This technology allows masking areas to be interlocked with the camera's pan/tilt/zoom movements regardless of the camera angle. What is unique about this feature as compared to conventional masking, is that the masked areas remain covered even when the camera is circling. In addition, when the zoom is engaged, the size of all masked areas adjusts in proportion to the zoom position.

This feature is essential for dome cameras used in wide-area monitoring applications.

Users can easily set masking areas on the screen simply by positioning each area to be masked in the centre of the viewer (indicated by two intersecting lines), and executing the masking function. A maximum of 24 masking areas can be pre-set to any of 160 horizontal and 120 vertical masking blocks, and up to eight block positions with two colours can be selected together.

The FCB-EX cameras have an E-Flip function that electronically flips an image upside down so that it is displayed on the monitor accurately. In a dome application for example, if a tracked object moves beneath the camera dome, the image can be inverted to maintain the correct orientation.

The FCB-EX series provides an Alarm function that detects changes in AF, AE, or both AF and AE levels of an image and outputs an alarm signal as required to external equipment via its control interface using VISCA protocol.

This feature is ideal for automatically performing functions such as sounding an audible alarm or triggering an electric door strike to lock or unlock a door when focus or luminance levels change.

These cameras are also equipped with a Spot AE function that allows them to detect changes in AE levels of designated areas of the images, and output an alarm signal. Users can designate multiple detecting areas from any of 16 vertical and 16 horizontal blocks.

In addition, these cameras feature a DAY/NIGHT mode that can output an alarm signal via the VISCA protocol in response to a change in the designated brightness/darkness level.

These FCB cameras incorporate a SMART lens control technology that monitors lens focus position during zooming and automatically compensates for mechanical misalignment which may occur over long periods of continuous use. With the introduction of SMART lens control, periodic lens initialisation is no longer required in continuous 24-hour operation.

The image stabiliser function minimises the appearance of shaky images caused by low-frequency vibration and maintains a normal horizontal resolution. This function is useful for outdoor surveillance and traffic monitoring applications.

The FCB-EX series is equipped with a Picture Freeze function that allows for the output of a still image while the camera is panning, tilting, zooming, focusing, initialising the lens, or performing pre-set operations. For example, the camera will output a still image before it begins to pan, tilt, or zoom, and once the operation is completed, the camera continues to display images. Unnecessary images are not displayed.