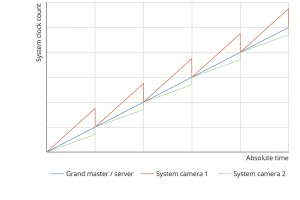 3D and multi camera systems – such as those using polarised cameras alongside standard cameras - require precise timing if they are to give usable, accurate data that is of use in industrial systems. This is especially true in high-speed systems such as product-line / food inspection, logistics and manufacturing.

Individual cameras can be pre-programmed to fire according to a specific number of clock cycles. But traditionally clocks built into cameras are reset when the power is switched on, and the time stamps asynchronously commence a count-up. For networked cameras, these time stamps gradually go out of synchronization as time passes owing to discrepancies in the clocks’ frequencies.

IEEE1588 is a protocol stipulated by the Precision Time Protocol (PTP) and is in effect for equipment connected together by Ethernet. It synchronises the time with extremely high levels of precision in cameras that are connected via an Ethernet cable to a ‘Grand Master’ standard time clock. Cameras that support IEEE1588 exchange synchronised messages with the Grand Master at predetermined cycles, with the internal counter re-calibrated in accordance with the time stamp information at the time of sending and receiving.

The IEEE1588 time stamp is an epoch time counter with midnight (00:00) on January 1st 1970 set as [0], and it provides a resolution of 1ns (1GHz). Contrary to the mechanism of the PLL (phase-locked loop), free-running counters are updated every time a synchronization message is exchanged. And reducing the cycle interval with the Grand Master improves precision even further.

Prior to IEEE1588 it was impossible to guarantee truly-accurate simultaneous capture in a 3D or multi-camera system.

Previous generations of GigE Vision cameras – up to and including GigE v1.2 - contained action commands that were designed to operate simultaneously with a single command for multiple cameras. However, there were still some inconclusive elements, such as delays in network propagation and delays in firmware processing.

To overcome these issues, a combination of IEEE1588 and the Action Command added to GigE Vision 2.0 enabled each individual camera to specify a time for executing actions.

The Sony XCG-CG camera series, for example, has been equipped with a function that begins exposure in synchronization with this absolute time, including functions defined as IEEE1588 applications conforming to GigE Vision standards that are known as Scheduled Action Commands.

The cameras have been equipped with a Scheduled Action Command that presets the time for starting synchronization for the software trigger and IEEE1588, for example it’s possible to set synchronisation to ‘once every second’, with all cameras in a network synchronised to the Grand Master at this interval.

Reducing the interval between synchronization enables it to be carried out while time discrepancies are still small, which helps to minimise jitter. With regards to free-running, the timing for starting camera exposure is aligned with the time that has been synchronised with the Grand Master. Although this is affected by the network environment, it is ideally possible for exposure synchronous control to be performed within 1μs.

It is generally necessary to prepare separate equipment that acts as the Grand Master - either special equipment available on the open market, or a PC with a Linux OS and running the free Grand Master software. However, this changed in 2018 with Sony introducing the first modules capable behaving as the master, eradicating the need for preparing a separate Grand Master Clock, simplifying the mechanism for synchronization between cameras; and between cameras and peripheral equipment – examples of this include the XCG-CG160.

- Simplification of Post-Event Analysis: Mounting IEEE1588 onto GigE Vision cameras enables the camera to synchronise its time settings with the Grand Master Clock, and the time stamps attached to image packets enable absolute time to be displayed.

One of the scenarios for use with ITS (Intelligent Transport Systems) is the more-accurate detection of vehicles in violation of the speed limit, without the need for radar. The time stamps obtained from two different cameras in a 3D imaging system will allow decisions as to whether vehicles are exceeding the speed limit or not to be made, and accurate times of images obtained from both points will simplify high-precision speed analysis.

IEEE1588 time stamps will also prove effective for industrial robots and all types of inspection devices used in assembly work. Adding absolute times to images showing inspection processing and results will enable the items in question to be easily identified.

- Improved Image Processing System Reliability: One of the issues with installing vision systems for industrial assembly and inspection robots and devices is the layout of the wiring. Cables are subject to wearing and severing when used for long-term operations, and this causes a drop in system operability. The chance of this increases in line with the number of cameras in a system - the number of cables must also be increased if each one is to be synchronised. The XCG-CG Series enables multiple cameras to be synchronised with IEEE1588 and Scheduled Action Commands. They also support PoE (power over Ethernet), which means that only one cable is required for exposure synchronisation, image output and the power supply.

- Curtailment of Tact Time: One issue for system developers and manufacturers using such systems that still remains is the time between image capture and peripheral equipment - not supporting IEEE1588 - taking action. As such, Sony is planning to link the new camera series to GPO (General Purpose Output) in the future, which will enable such peripheral equipment to be operated based on time synchronicity.

Doing this you can see that, for example, by connecting the camera’s GPO to robots during the period - from the 3D camera capturing images to the robot performing work picking operations - will enable the image capturing and robot operations to be synchronised. Another example is in bottle inspection, here devices require multiple cameras to be synchronised and for which inspection samples are conveyed at a predetermined speed, taking this approach will have an extremely high affinity with systems that use the high-precision time synchronization capabilities of IEEE1588.

Last year saw the launch of polarised cameras, such as the XCG-CP510, which use an on-chip polarised to detect the plane of light in 4 directions (using Stokke’s Vector to calculate the precise plane that this comes from).

Using the GigE standard, Sony’s XCG-CP510 is able to fit this functionality into an IEEE1588 network to precisely control the firing of each camera, but the polarised camera can deliver 3D images itself - using the surface normal function of the polarised camera it’s possible to detect different objects and the way light reflects off each surface and use this to either compliment 3D image data, or act as a standalone alternative 3D system. 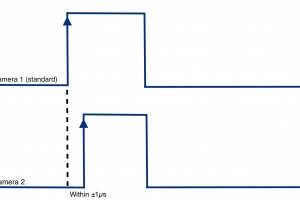